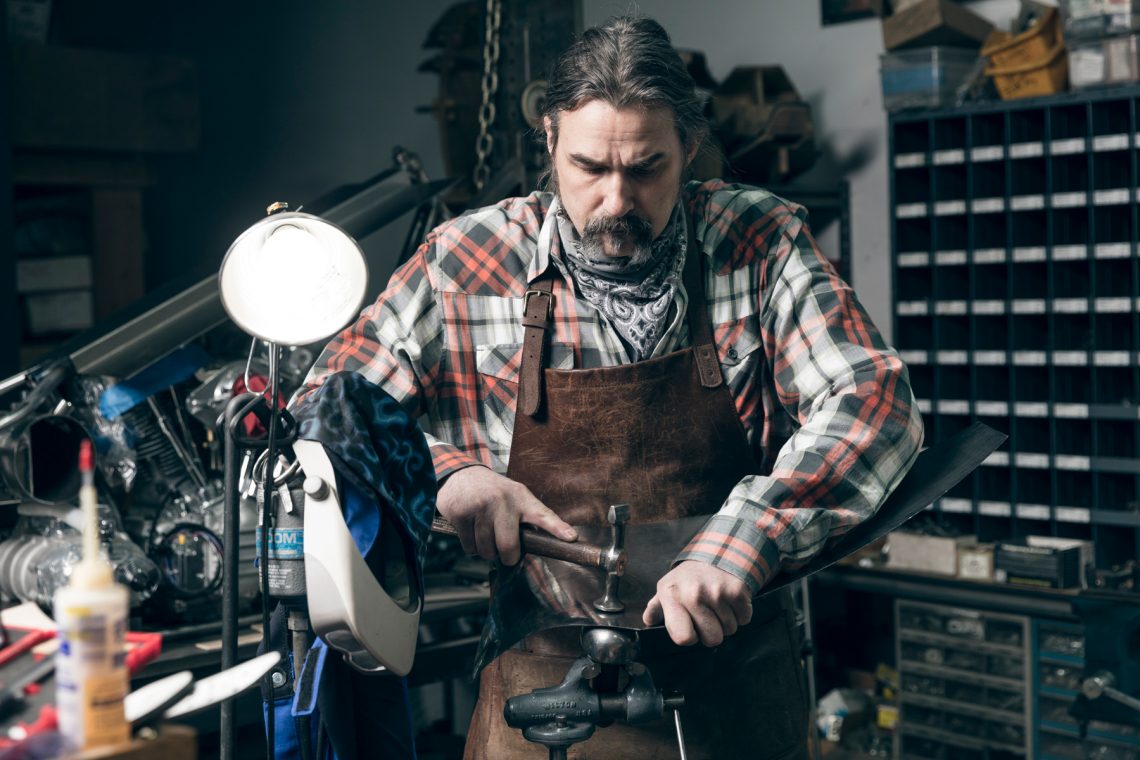 Despite the rise of industrialization in the 19th century and the technological revolution of the late 20th century, craftsmanship has endured. It is an art and craft of making; bridging the gap of alienation between maker and material left in the wake of growing assembly lines, mass-scale production, consumer culture, and an age of digital landscapes. Even as machines replaced hands, craft and craftsmanship has been celebrated—quietly, deliberately—alongside increasingly automated processes and systems.

For craftsmanship and the custom-made object—whether functional or purely artistic—taps into a history and shared human narrative that has been told throughout time. Each piece of metal, wood, textile, and fabric touched by the hands of those who have come before carry on a piece of the artist’s or crafter’s passion; a lasting legacy and chapter of their own story imbued within the final product. Craft is an expression, it is function and it is form; connecting the tangible and intangible from ideation through execution, drawing upon the skills and practices passed down for generations.

For Eric Gorges, owner of Voodoo Choppers, president of Hammer in Hand Productions, and host of “A Craftsman’s Legacy” based in Auburn Hills, Michigan, craft is a personal legacy and his passion for it, whether shaping metal for custom motorcycles or inlaying Padauk hardwood within a box meant for card games, comes through in each sweeping line and careful detail found long after initial survey. Now an accomplished craftsman, successful entrepreneur, and well-known host of the five-season-long “A Craftsman’s Legacy” series that invites the audience on a journey of history and craft as he meets with skilled makers of all fields and places, Gorges’ crafted story initially began in a decidedly different area of expertise.

“I start down the path of IT working for Xerox and I started there at a really young age, like 16-years-old as a stock boy, and I was there at a time when this gigantic, global company was moving from an analog environment to a digital environment. It was making copies instead of flashing and taking a picture and printing the picture. It was taking a scan and reproducing the scan,” Gorges said.

Though he soon moved into an IT role—which he enjoyed—Gorges experienced severe health issues and ended up leaving the lucrative digital world in the late 1990s to pursue his true passion: working with his hands. Having grown up in a family where his grandfather was a cabinet-maker and his father was an accomplished woodworker, a “do-it-yourself kind-of-guy,” and a mentality of not being intimidated by learning new skills, Gorges had honed an affinity for working with his hands from an early age, from framing, drywall, and plumbing, to electrical, concrete work, and brickwork.

“When I got sick, that is when I had somebody ask me: ‘If you could do anything you wanted to do, what would you do? If you didn’t have to worry about money, if you didn’t have to worry about your skills, what would you do?’ Man, I said: ‘I’d work with my hands and I’d make things, because I love making things.’ That is really what it comes down to: I love making things,” Gorges said.

“I was pretty big into motorcycles, I always loved motorcycles since I was a little boy, and I thought choppers were just cool as hell. I said I’d like to learn how to build a motorcycle. I had bikes, I rode, but I wanted to build one from scratch; from nothing. Start from nothing and build a whole motorcycle,” Gorges added.

With a vision burning bright in mind, Gorges sought out Ron Fournier of Fournier Enterprises Inc. in Mt. Clemens, Michigan to learn the finer techniques of metal shaping, welding, and fabrication. Fournier, an accomplished fabricator and metal shaper, has dedicated his career to transforming metal for championship-winning race cars, promoting the craft of metal work, educating professionals and hobbyists through his apprenticeship program and books, and building cars, among other projects. With Fournier’s tutelage, Gorges began working on vintage cars and custom hot rods as he cultivated a mastery of the craft.

“I wanted to learn how to become a metal shaper—it is taking flat material and making compound shapes from scratch. I took an apprenticeship with [Fournier] who happened to be in my backyard and was one of the best in the world,” Gorges said. “I took an apprenticeship with him and really dove into it and spent all my time and energy learning how to shape metal and weld and learning about fabrication.”

Launching Voodoo Choppers in 1999, Gorges quickly expanded his custom shop—and reputation for high-quality work—from garage start-up modifying Harley-Davidson motorcycles from their stock frames, fuel tanks, fenders, exhaust systems, and controls; to offering custom, handcrafted motorcycles tailored to the client. By 2011, the Voodoo Choppers also began to offer individual services for clients interested in specific handcrafted components such as exhaust systems and frames, as well as a line of parts and apparel.

With countless custom, handcrafted machines—names like Bootlegger, Burgundy, Captain America, Patience, Rebel, Voodoo Salsa, and War and Peace—tailored to the client’s riding style, preferences, and tastes in the Voodoo Chopper portfolio, the common thread across each distinctive project is a creative process that courts the rider slowly with its design and details.

“I don’t want to build a motorcycle that you look at one time and you see everything. I want to build a motorcycle that six months down the road, you’re seeing something for the first time, because there is so much detail to take in, you are not going to see it all the first time you look at it. I love it when people call me back after they took delivery and they have had the bike for a while and they’re like: ‘Dude, I just saw how you did that. That’s crazy,’” Gorges said.

“It’s the small little details that people aren’t going to see; your average viewer isn’t going to see. It wasn’t meant for them; it was meant for the people who want to appreciate it. They want to look further into it. They look at the way things are mounted and they look at how the different radii are placed on objects and how they contrast with other surrounding objects,” Gorges added.

It is a process that begins with a conversation, as Gorges noted, learning how long they have ridden, what type of bike they are interested in having built, and whether they are a more aggressive rider or prefer the more laid-back cruise where speed is not of the utmost importance. Other details, like whether they own other bikes, want to make a statement with a massive engine or through curb appeal, prefer to ride or trailer it to an event, and if they plan to take a passenger with them or would like the ability to have a second rider, are also taken into account and influence how the bike will ultimately look and feel.

“It is a lot of discovery for both people, because you may have already done a lot of research in it and you might already know all this stuff, or it could be your first bike and you just want to have a motorcycle built,” Gorges said. “It is very akin to having a suit made for you, where you go in and work with a tailor and you pick out the fabrics and they craft this beautiful suit that is built just for you—it might fit somebody else, but it is not going to fit them as well as it does you. The more I know about my clients, the better the end result will be.”

Gorges also noted the team tends to use older style motors, which is a big consideration as well in terms of the creative process whether the client is looking for a motorcycle from the 1950s, 1960s, or 1980s.

“I’m slow. I’m very deliberate. I don’t rush it. If it is not done right, it doesn’t leave my shop. If I’m not happy with it, you’re not going to be happy with it,” Gorges said. “I have this idea in my head, I’m going to build it, and I’m pretty sure its going to look good, but we are going to put it on there and see and we are going to take a look at it and sometimes I’ll let it sit for a week or two and just stare at it. It allows the ability to move off your first intention when you are looking at opportunity.”

An artist in his own right, Gorges allows inspiration to move him and his hands as he works the metal frames and fuel tanks into the shapes and forms that often end in unexpected moments of delight and detail. Sweeping, curved lines often take an unexpected journey, sculpting a visual experience as much as visceral through metal and machine. Wiring harnesses are hidden within the structural frame, while operational parts that make the bike look like a machine such as spark plug wires, cables, and hoses are left visible. The underside of the seat pan is defined by their intentional shaping, riveting, and detail work—often that go unseen, but are just as important to Gorges as the frame itself.

For Gorges, who admittedly was more liberal in a sense of ergonomics in his younger years as a builder, design is everything and is like art in a way.

“Even the very simplistic design in and of itself can stand against something that is incredibly complicated. Now, I tend to like things that look very simple, but are very complicated to begin,” Gorges said. “That drives me; that challenges me to make it look easy and simple, but the further you get into it, the more challenging it looks or is to build.”

As a craftsman, Gorges’ pursuit of new trades and skills continues as he learns alongside sword-smithers, cowboy hat-makers, furniture-makers, copper still-makers, glass-makers, sculptors, metal engravers, and wood turners in his five-series-run “A Craftsman’s Legacy.” His passion for craft has also led him to establish his own woodworking shop, where he has spent the last five years perfecting his skill at cabinetry, woodturning, and carving, among others.

“I’ve also learned that precision is still an artform within woodworking, it is just a different type of artform. It’s looking at something and understanding the value of design within something is subjective. Measurements are subjective in woodworking to some extent. It has been a very hard thing for me to appreciate, but I’m getting there,” Gorges added.

Full text available in Great Lakes By Design: In Flight, 2021 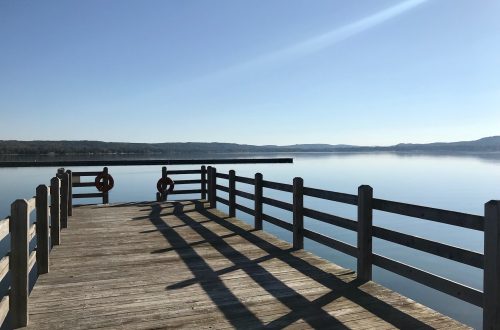