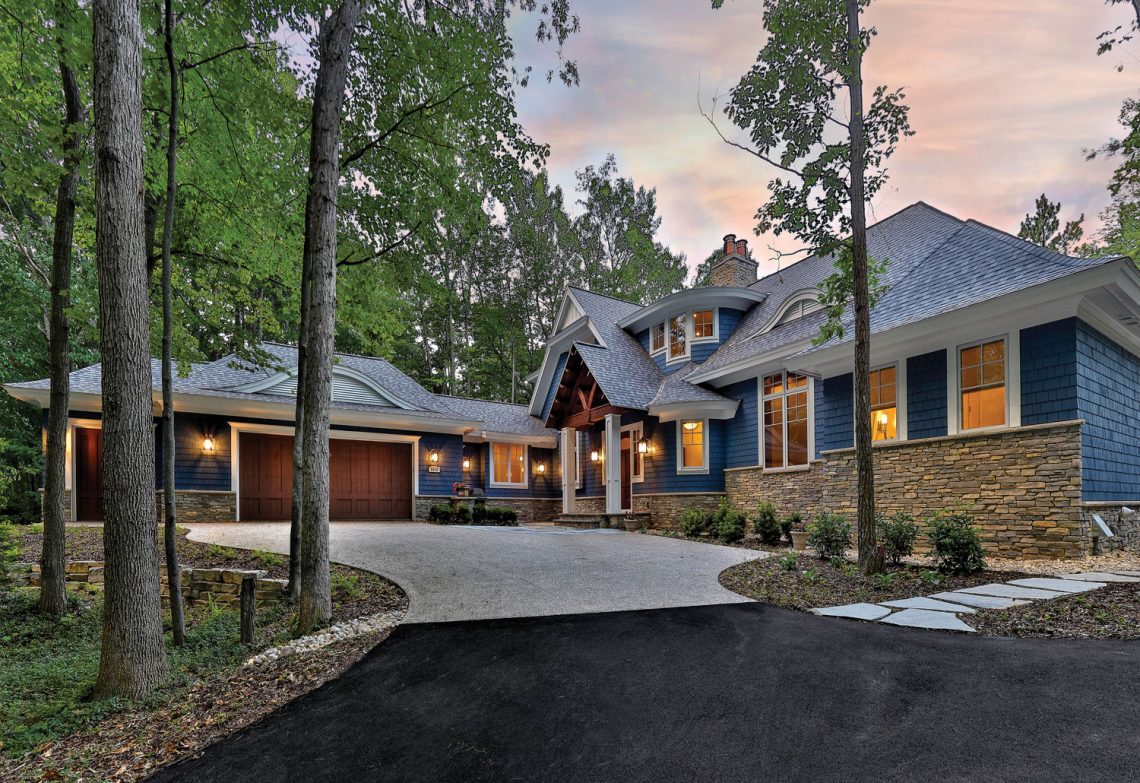 There is a quiet palatial air to this lakefront home perched on the sloping topography of its Green Lake site. Upon approach, elegantly curved lines are visibly juxtaposed with clean-lined peaks in the roof; rich, blue, cedar shakes are contrasted with lighter stonework and white trim; and a surprising element of warm millwork welcomes those to the front entry. From the lake, a turret rises three-stories tall, complete with a winding exterior staircase guiding footsteps from the upper deck to the grotto below.

On the interior, a staircase with floating treads allow an immediate visual of Green Lake beyond, exposed beams stretch across ceilings, heated tile wrap the floors, and a neutral palette with warm woodwork and stone create an inviting ambiance—all organized around a key element: a three-story fireplace with direct access to all floors.

Its picturesque first impression and detailed craftsmanship was the result of the combined vision of the clients who sought to replace their existing cottage on the property, and the creative and technical team of Widing Custom Homes Inc., Shoreline Architecture & Design Inc., and Distinctive Interiors By Mari.

“There is so much going on in this home,” said Roger Widing, president and owner of Widing Custom Homes. “[The clients] were such great people and they had a cottage on the property. They had been coming up to Green Lake and then the family grew and they decided they needed to tear that cottage down.”

Widing Custom Homes provides high-end quality construction services for clients across architectural typology, project scale, and renovation or new build in the greater Traverse City area counties and northern Manistee and Wexford Counties in northern Michigan. The company, which is based in Traverse City and founded by fourth-generation-builder Widing in 1976, has built a reputation for expert craftsmanship, quality, and artistry throughout the years. From custom and specialty construction services, site planning and consultation, and landscape design and installation, to ongoing home and ground maintenance, Widing Custom Homes strives to meet unique individual needs and requests on every project.

When the client approached Widing Custom Homes with plans for a new home at the Green Lake site, Widing said they set them up with Shoreline Architecture & Design to draw up initial house plans.

“Once we tore the old place down—100 percent tore out the crawl space so there was a blank canvas—you could see what the contour of the land was and how the home was going to have to sit according to what they wanted,” Widing said. “Between myself, the homeowners, and the architect, we stood there and came up with an idea of how the house should sit…to take advantage of all the views of Green Lake.”

Michael H. Pattullo, AIA, president at Shoreline Architecture & Design Inc., noted at the onset the clients had a design that captured their basic programming ideas and goals for the new cottage, which drove several key elements of the home.

“The existing house was really an older cottage, so they wanted to do something that was more significant and be able to accommodate an in-law suite,” Pattullo said. “They had this beautiful piece of property and that is what we started with. They had a nice view and they had a little garden on the water side of the property they were trying to preserve so the in-law suite could see it from that end of the house. Those were some of the basic parameters we started with.”

Shoreline Architecture & Design is a Petoskey-based high-end, full-service architectural design studio crafting spaces that enhance the human experience. Since its establishment in 2007, the collaborative studio has completed projects in retail, hospitality, healthcare, corporate, and single-family markets. While the studio provides architectural services in both the commercial and residential markets, Shoreline Architecture & Design specializes in custom single-family homes and working with clients to ultimately bring their inspiration and vision to reality.

While the architectural vernacular and spatial planning of the cottage developed organically as the clients and design team moved through the conceptual process, Pattullo noted the homeowners wanted to organize the main living spaces around a fireplace element, which ultimately led to a decision to organize the entire house around it.

“When you come in, there is a large three-story stone wall that goes from the lower level all the way up to the upper level. It is a common stone wall you experience from every level in the house,” Pattullo said. “The fireplace wall was an organizing element for all three floors, so we kind of took it a step further than what they originally envisioned.”

From there, the programming of the home was driven by the decision to place the master suite with an office on the second floor, while the in-law suite was set on the main floor.

“With wanting views from every major living space, the house didn’t become so sprawling. We took the footprint and were able to pinch it down a little bit by raising the master suite up on the second floor,” Pattullo said. “They have great views from up there and a lot of privacy.”

The five-bedroom home, complete with three full bathrooms and two half-bathrooms, also features living space and a fitness room in the finished basement, sauna, a kitchen open to the main living space and dining area—made distinctive through the use of large wooden beams—which then connects to the screened porch through a NanaWall bi-fold door and operable glass system. Widing noted the doors are collapsible and when pushed up against either wall allow for a great view and opportunity for lakeside breezes.

In the turret, circular sitting rooms are found on the first and second floor, while the outdoor shower and grotto are accessible from the exterior on the lower level. The staircase, which winds around the outer edge of the turret, was built with storage space underneath the stairs and is one example of how the construction and design utilize space in the home.

“The turret and those circular stairs were all built in place,” Widing said. “It was an all stone staircase that took a lot of engineering and hard work to achieve that circle and make sure underneath we had an area for toys and things.”

In the dining room, hand-stained cherry woodwork and a tongue and groove barrel ceiling—from which a metal branch-inspired chandelier suspends—complements the solid granite table top and white upholstered chairs. Granite and silver-hued chandeliers are also employed in the large kitchen, where a granite island is layered with another section.

“The kitchen, all the cabinets: it worked really well. The designer they used was so good to get along with and her ideas were phenomenal,” Widing added.

Distinctive Interiors By Mari, which is a full-service interior design company based in Carmel, Indiana, provided its design services for the interior aesthetic of the home. The company is led by Mari Pawletko and has more than 25 years of experience of assisting clients in building their home from the ground up.

The kitchen, which typically serves as a focal or gathering point in the home, faces Green Lake and ties in seamlessly with the living room’s exposed wooden beams and dining room’s unique barrel ceiling through the use of wooden cabinets, silver hooded range, and white tile backsplash. The more neutral palette enhances the millwork found throughout the main living area, while maintaining the outdoor lakefront as the primary focus.

“My favorite part of the project was probably all the trim work that [the clients] requested to go into the home and the details of each room that the trim work was built in,” Widing said. “There was a small hallway library and all of that had to be made out of American Cherry. There was a certain way the doors had to be made and there is a window seat in this hallway library.”

The solid wall of books on the lower level reveals a rather unexpected feature of the home: a hidden wine cellar and storage space. Pattullo noted the space is typically a leftover area or closet and the inspiration for the cellar was a dream the homeowners had always wanted.

“It was just a fun thing they have always wanted to have. We had done hidden rooms before, so it was something we knew how to do in terms of a hidden door or basically a set of shelving that will swing like a door and back behind there is the wine storage,” Pattullo said. “They have a tasting table or counter where you can open bottles.”

Widing also noted the mechanical room is also hidden behind a panelized wall and all but disappears when the doors are closed.

“There is so much going on in the home. It was very well thought out. I don’t think there is really any wasted space in it and it is all very usable,” Widing said. “It has a nice warm feeling. When you go in, you immediately feel right at home walking in the door with the colors, carpet, wood, and the tile floors…and outside with the cedar shake makes it more of a cottage-feeling home.”

With the organizing element of the fireplace experienced on all levels of the home; the turret housing the outdoor shower, sitting area, and office as it ascends; and the stair wrapping around the exterior, Pattullo said the look of the house is quite spectacular in terms of the detailing the homeowners allowed them to do.

“It really made for what is a beautiful home,” Pattullo said. “We were very pleased with the detailing, the interior, and the exterior. Widing and his crew did a spectacular job on the millwork. It’s beautiful. We don’t always have an opportunity to trick out a house from a millwork standpoint, and once you have the opportunity, having a crew that does it well is refreshing.” 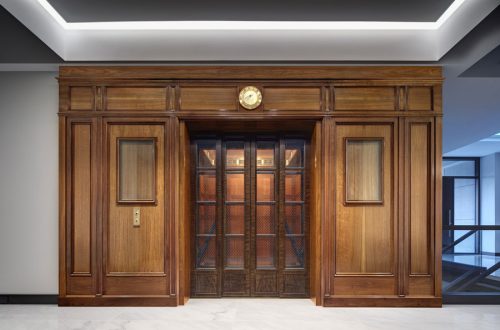 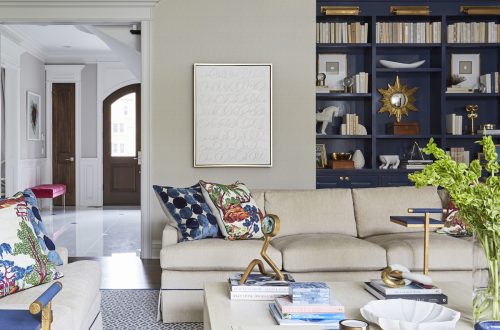 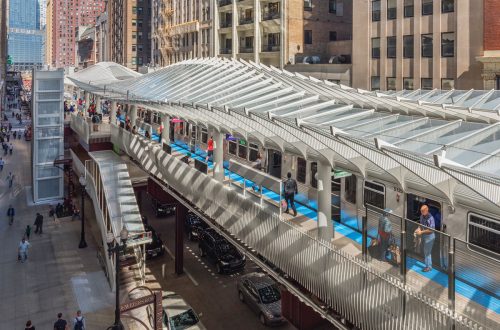