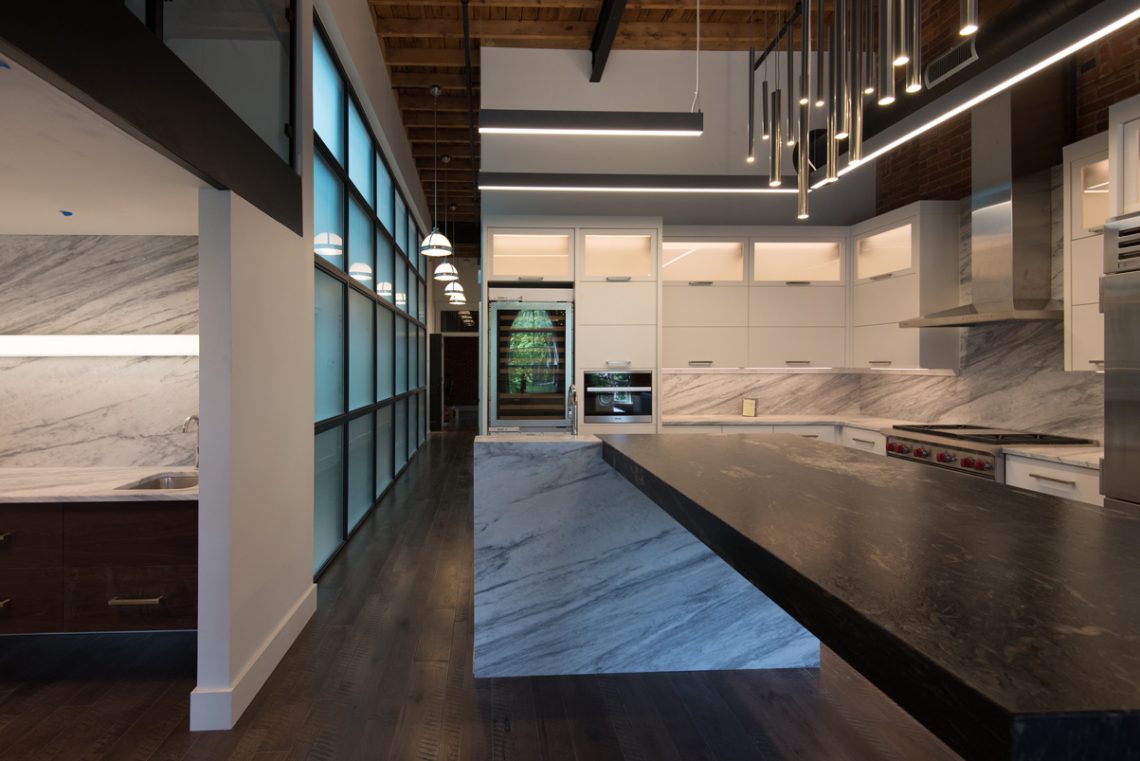 In downtown Kalamazoo, Michigan, the renovation of the third floor of a historic building transforms a vacant, open space into two individual residences for its owners. Featuring a collaborative design-and-build team, which includes two businesses local to Kalamazoo, Intersect Studio and Buday’s Home Electronics Simplified, the project comprises the restoration of the building while maintaining its charm, as well as tailoring each unit to meet the needs of its resident with the installation of innovative and modern technology.

Intersect Studio is a design firm specializing in strategy, architecture, planning, interior design, and experiential branding in Kalamazoo. On this project, the company paired its services and worked alongside Buday’s Home Electronics Simplified, or Buday’s, a Kalamazoo-based organization that customizes and installs home electronics into luxury homes.

The restored, multi-use structure not only features residential space, but also commercial and retail as one floor of the structure has been converted into additional offices for building owners, PlazaCorp Realty Advisors Inc. The commercial space extends from the neighboring company-owned building through an opening in the wall and a few steps down into one structure from the other.

Megan Burtzloff, NCIDQ, senior designer at Intersect Studio, noted prior to joining the team on the renovation project, PlazaCorp had an on-staff architect parcel and divide the third floor of the long-established structure into two separate units with a hallway split down the center.

Intersect and Buday’s combined their areas of expertise to create two spaces that embodied the preferred aesthetics of their users. Maintaining the architectural integrity of the traditional structure, while integrating coming-of-age technology, was the objective of this project; one that was achieved through use of inventive design strategies.

“They came to us with the floorplans, as they had discussed them internally, and we met further with [the clients], and tweaked them to fit their unique needs,” Burtzloff said. “While they had an initial plan that was used for permits and planning, we helped develop that to fit exactly what they needed.”

The original characteristics of the space integrated into the final product became a large part of the project goal, while also creating a number of design challenges for the team as the open room went under construction. Perimeter walls made up entirely of brick, exposed wood ceilings, and open beams are a few unique elements of the structure kept intact throughout the restoration process.

“Because it was a historic building, they reclaimed as much as they could of the wood of the space, and a lot of that was then reused in the space,” Burtzloff said.

The team was also tasked with finding adequate wall space to utilize when mounting systems such as switches and panels required in the wall, since the perimeter of the project is masonry. Leveraging the only surface composed of drywall, the interior wall dividing the two lofts became the solution.

For the same reason, hiding wiring for the two units proved more difficult than on some projects converting more modern structures. To address the challenge, the electrician carved out a channel in the floor baseboards so that wiring could be tucked inside and out of sight, since running the wiring through the brick walls was not a viable option. The low-voltage cabling utilized for distributing music, video and data to TVs, speakers, and command stations were also run along the ceiling beams.

While the original architecture of the building had a number of constraints in the renovation process, it led to interior elements and characteristics distinct from that of a new build. Burtzloff noted multi-family housing developments often feature units that are the same, but these two specific units came out quite differently, even in terms of the interior floorplan.

For the design and style of each unit, both residents had something unique in mind: one highlighted the original architecture of the building with an industrial approach; while the second featured a more modern interior.

For the first unit, the design incorporated open beams, hardwood, exposed brick, and metal. Music and sound were also of high importance, leading to a loft design layout that features a custom-sound system installed by Buday’s. Speakers from Leon Speakers, an American manufacturer of custom audio and audiovisual solutions based in Ann Arbor, Michigan, were hidden beneath drywall or paint and recessed into newly built floating ceilings. The hidden speakers complete the sound system that has the capability of playing music throughout the entire unit at different volume levels depending on the room, all the while being out of sight.

A curved, serpentine feature wall designed by Intersect also establishes a focal point in the space, and at the same time leaves the controls accessible. The feature wall has a built-in wine cabinet, a television, and displays a guitar collection. The television was also customized to have additional length on the arm, so that it could be turned and swiveled toward the kitchen, providing optimal viewing from multiple areas in the loft.

“The interesting part of this is that it shows that technology can blend in just as well into this industrial type of residence and more of the contemporary residence as well. You don’t have to be super modern in your design for technology to fit in, it can go in any type of room design,” said Lisa Montgomery, account manager and copywriter at KMB Communications, representative of Buday’s.

Composed with contemporary design in mind, the second unit differs from the one across the hall with a brighter ambience cultivated by the use of clean whites and walls lit up from behind. In his unit, the technology was not on display; rather, the priority became hiding it in the design.

“Two things that we pride ourselves on: simplicity of the operation, and then the design and hiding equipment,” said Ed Buday, owner of Buday’s. “If you go into one of our projects, in most cases it is extremely hard for you to find out where the equipment is, unless the homeowner tells you where it is [located].”

The technology in this unit is controlled with the use of a simple app-based system. At the push of a button on the control, a television in the bedroom connected to a motorized lift slides out from under the bed, flips, and lifts into perfect viewing position of the bed. The bed frame was custom-built by Dutch Made Custom Cabinetry, a company located in Grabill, Indiana, that specializes in hand-crafting custom doors and cabinets. It was created with enough space to house the bulk of the electronics for that unit underneath the frame and each bedroom renovated for this project includes elegant, motorized window shades in the design that can smoothly lower and lift, controlled by a handheld remote.

Full text available in Great Lakes By Design: In Flight, 2021 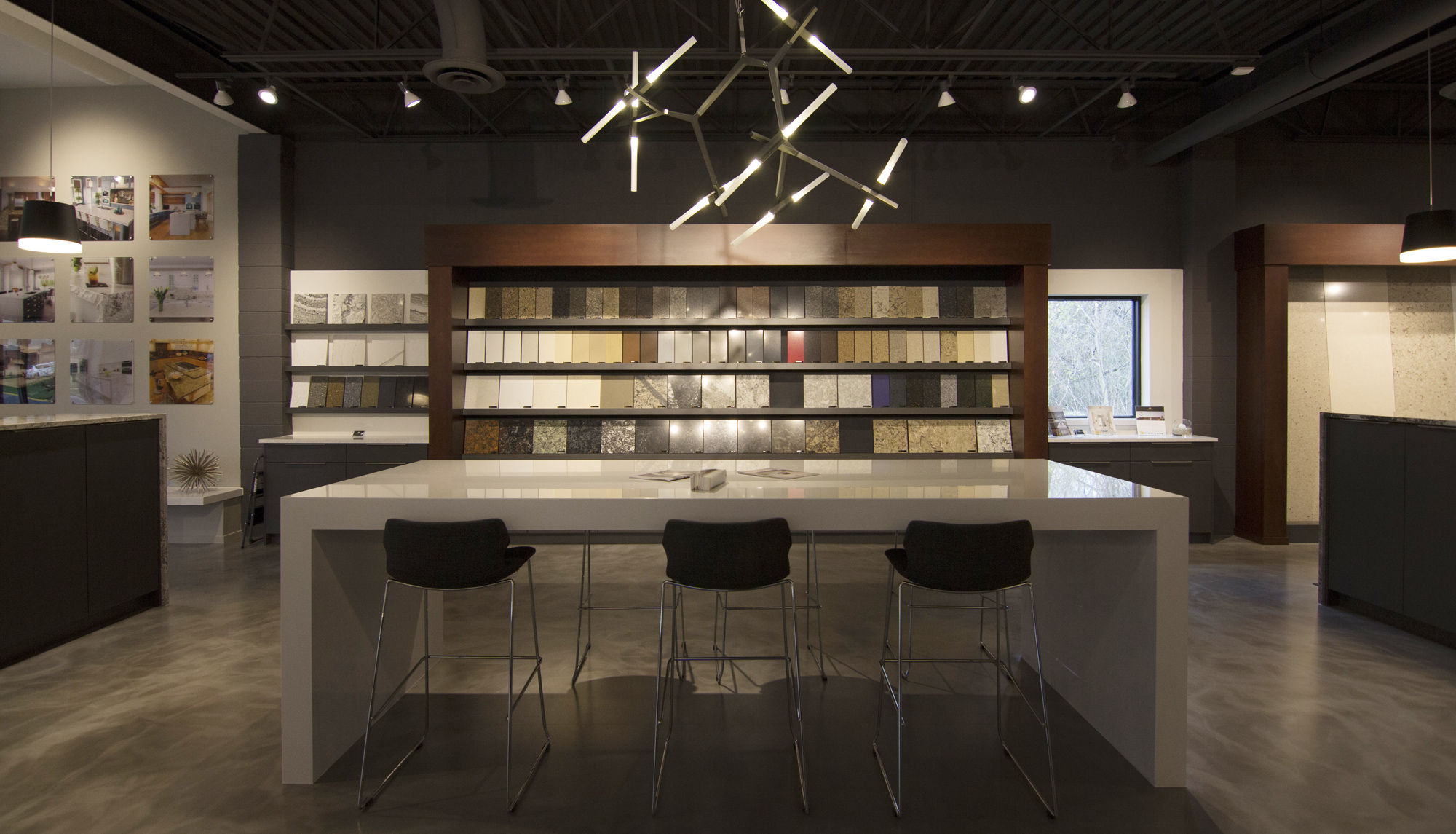 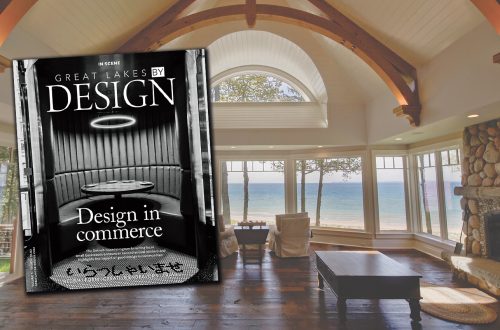